You have probably arrived at this page because you were researching the meaning of Jimmy Page’s Zoso symbol, which appeared on the cover of the fourth Led Zeppelin album.  You have come to the right place.  On this page I will provide details of the source of the symbol and why Jimmy Page selected it.  There has been lots of weird speculation about what the symbol means, such as the three-headed dog (Cerebus) that guards the gates to hell.  No idle speculation here; just the facts and references so you can look the information up yourselves and draw your own conclusions.

If you wish to leave any feedback please do so on the comments page (menu top right).

This research was originally published on the inthelight.co.nz website.

The four symbols that appear in the site header was also the name of the fourth Led Zeppelin album, being one symbol for each band member (plus a fifth symbol for Sandy Denny who duetted with Robert Plant on The Battle of Evermore, which was one of the very few times Plant ever sang with another person).

Sandy Denny’s symbol = “an old symbol for the Godhead”

Where did the symbols come from?

When Jimmy Page was asked what his symbol meant he said that the band members selected them from a “standard reference book” of sigils (a sigil is a symbol used in magic) and suggested that interested people should go and look them up in a “standard reference text”.  Page used to own a second-hand bookshop called the Equinox (4 Holland Street, Kensington, London – no longer open) which specialised in books from the occult.  He clearly had better access to these “standard reference books” than us, because when I started searching I had great difficulty finding any books with any symbols and sigils that looked even vaguely similar to the symbols above.  With some research it proved possible to find the symbols for Plant, Jones and Bonham (and Sandy Denny), but Page’s symbol was elusive and this lead to greater speculation about its magical significance.  There are books with the symbols in them but they are hard to find and it is easier if you live in France and can speak French.

The symbol does not spell the word Zoso, but this is a good name for referring to it.  This is what I believe Mr Page did in his young days.  Jimmy’s astrological sun sign is Capricorn, and if you know your astrology you will know that Capricorn is ruled by the planet Saturn.  Jimmy wanted a symbol for Saturn and he found a selection in a textbook (some possible options will be listed shortly).  Now, Jimmy’s first guitar was a 1959 Futurama Grazioso

that his parents bought for him when he was 12 years old.  One of the Saturn symbols in the text books looks a little bit like “zioso” of Grazioso.  Perhaps this was why this particular Saturn symbol caught his eye.  I do not personally believe there is any deeper meaning than this, but there are many people out there who do.  They origins of the symbol go back to at least 1521, and almost certainly earlier (to the 1300’s), but what the structure and form of the symbol originally meant (if anything) has been long lost in the sands of time. 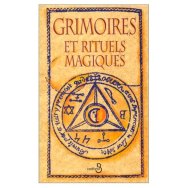 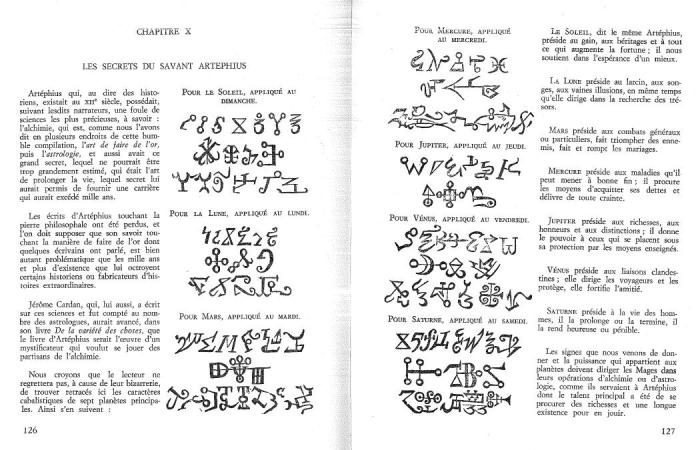 The French text simply says that “Saturn rules over the lives of mankind, extending or terminating it and making life happy or painful“.

The Dumas text easiest reference book to locate, but there are others and it is likely that Page had a copy of Le Dragon Rouge (the Red Dragon).  If you go looking for this book, note there are several called Le Dragon Rouge and they are quite different books.  The book you want is shown below, and the collection of symbols appear on page 51.  This book is rare and expensive (selling on eBay for several hundred Euros), but you will note that the collection of symbols for the planet Saturn is identical to that published in the Dumas book above. 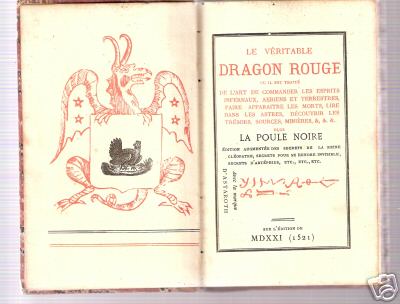 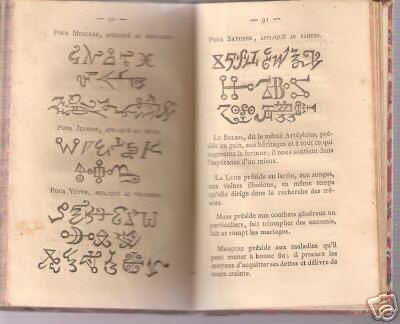 This 1850 version of Le Dragon Rouge is a reprint of  and earlier 1521 text “The Red Dragon and The Black Hen, including the secrets of Artephius, the secrets of Cleopatra and how to make yourself invisible“.

There is another possible reference text that Jimmy Page had, which was brought to my attention by Mr Joseph Peterson from esoteric archives.  Below is page 31 from a rare 19th century dictionary of symbols called Le Triple Vocabulaire Infernal Manuel du Demonomane, by Frinellan (a pseudonym for Simon Blocquel), published by Lille, Blocquel-Castiaux, 1844.  You may find second hand copies of this rare book but expect to pay several hundred Euros for them on eBay. 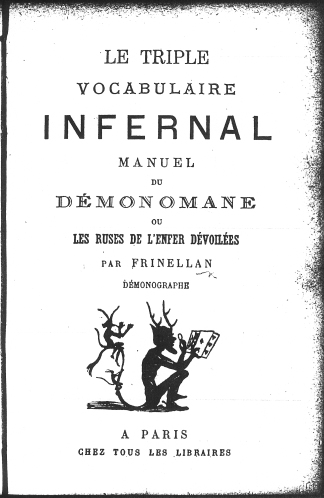 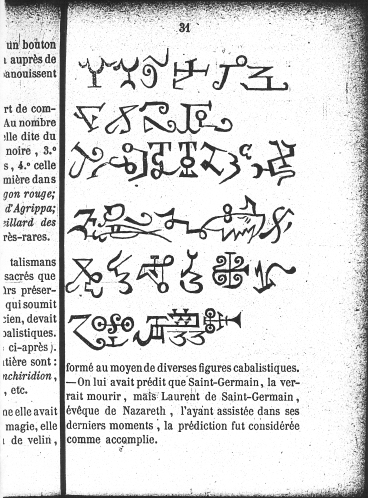 The collection of symbols for Saturn are slightly different to the texts above, but the Zoso symbol stands out clearly.  This book is hard to find, but is available for viewing in the St Pancras reading room in London, and scanned copies can be obtained through the British Library imaging service (shelf mark number 08632.de.3).  The text is in French, and Mr Peterson’s helpful translation of the relevant text from page 30 states:

“Characters.  The majority of talismans owe their virtues to the sacred characters that the ancients regarded as a sure defence. The famous ring of Solomon, who subjected the geniuses to the will of this king magician, owed all its force to the Kabbalistic characters. (For these characters see the following page). The works which treat on this matter are: the Clavicles, the Red Dragon, Enchiridion, the Treasure of the old man of the Pyramids, etc.”

These 19th century texts were referencing earlier works, and Mr Robert Ansell of the fulgur site brought the 1557 Cardan text to my attention.  Jerome Cardan was 16th century mathematician who had some passing interest in hermeticism and the occult.  Cardan’s Father was a friend of Leonardo da Vinci, and whilst Cardan had a passing interest in astrology (he got into trouble for doing a horoscope for Jesus Christ) and hermetisicm, he was foremost a mathematician and he considered the writings of Artephius to be nonsense!

Cardan compiled a book in 1557 called De rerum varietate, in which Chapter 91 was entitled ‘Ars magica Artefii et Mihinii‘ (The magical art of Artefius or Artephius and Mihinius).  The set of symbols for the planets appear on page 789 of a 1580 reissue of De rerum varietate and the symbols can also be found in a 1663 publication Complete Works (Opera Omnia) on page 313: 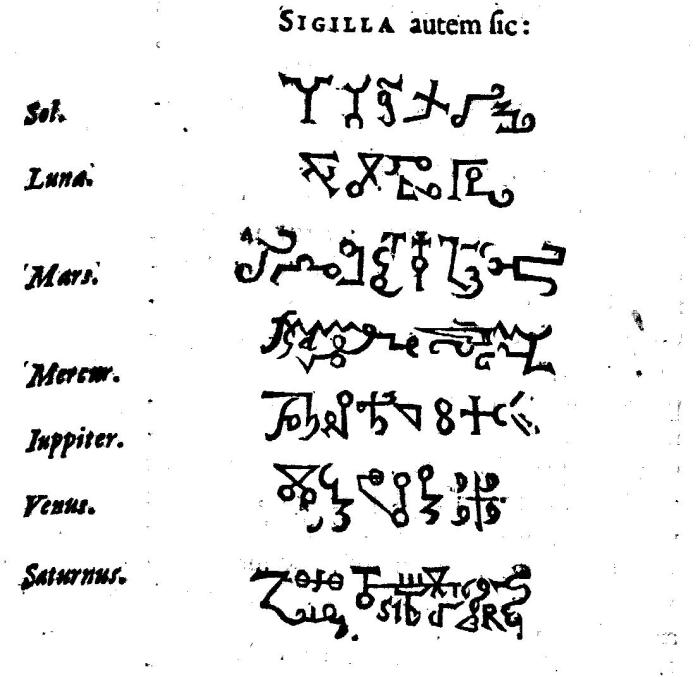 An easier book to source is Fred Gettings’ “Dictionary of Occult, Hermetic and Alchemical Sigils” by Fred Gettings, published in 1982 by Routledge & Kegan Paul, ISBN 0-7100-0095-2.  You will find the Saturn symbols on page 201, noting that the symbols in Gettings’ dictionary are his own line drawings – they are not Cardan’s originals.

So in summary for Jimmy Page’s Zoso symbol, Page wanted a symbol for Saturn, the planetary ruler of his astrological sun sign Capricorn.  We aren’t certain exactly which reference book he used, but the collection of Saturn symbols dates back to at least the 1300’s and he chose the Zoso one most probably because it reminded him of the name of his first Grazioso guitar.  I don’t know too much more about Artephius and I don’t promise that understanding these symbols will bring eternal life and prosperity!  If you want to investigate further what the structure of the Saturn symbol may mean then please check out the speculation page. 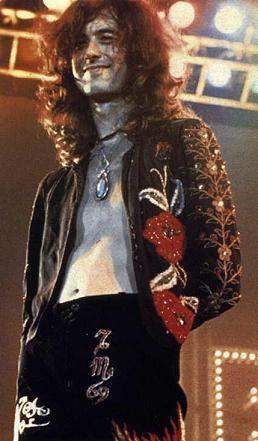 Page’s interest in astrology also resulted in the embroidery of his ascendant and moon symbols (the sun, ascendant and moon are the three most important astrological signs) on some of his performance attire (trousers shown in the picture opposite).

The symbols on the right of his trousers from top to bottom are Capricorn (Jimmy’s sun sign), Scorpio (Jimmy’s ascendant) and Cancer (Jimmy’s moon sign).

This page is mainly about Jimmy’s Zoso symbol, but let’s briefly cover the symbols chosen by the other Led Zeppelin band members as these are more easily found.

Robert Plant’s symbol is the feather of Ma’at, the Egyptian goddess of justice and fairness, and is the emblem of a writer (as in one who composes song lyrics).  It can be found in “The Sacred Symbols of Mu” by Colonel James Churchward.   It is in Chapter V, on pages 142 and 143.  This is not a common symbol, but it does turn up in both Egyptian and Red Indian texts.  When asked about his symbol, Plant said:

“My symbol was drawn from the ancient Mu civilization, which existed about 15,000 years ago as part of a lost continent somewhere in the Pacific Ocean somewhere between China and Mexico.  All sorts of things can be tied in with the Mu civilization, even the Easter Island effigies.  These Mu people left stone tablets with their symbols inscribed into them all over the place in Mexico, Egypt, Ethiopia, India, China and other places, and they all date from the same time period!

The feather, a symbol on which all sorts of philosophies have been based and which has a very interesting heritage.  For instance, it represents courage to many Red Indian tribes … I like people to lay down the truth.

No bullshit. That’s what the feather in the circle is all about.” 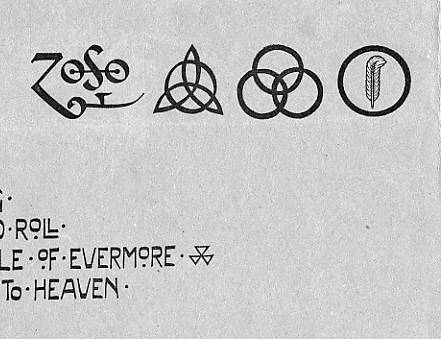 The symbols of John Paul Jones, John Bonham and Sandy Denny (who’s symbol appears at the end of Battle of Evermore on the Led Zeppelin IV album cover) can be found in The Book of Signs by Rudolf Koch (published by The Limited Editions Club, London, 1930) – pages 32 and 33 have the symbols for John Paul Jones and John Bonham, and Sandy Denny’s symbol can be found on page 5. 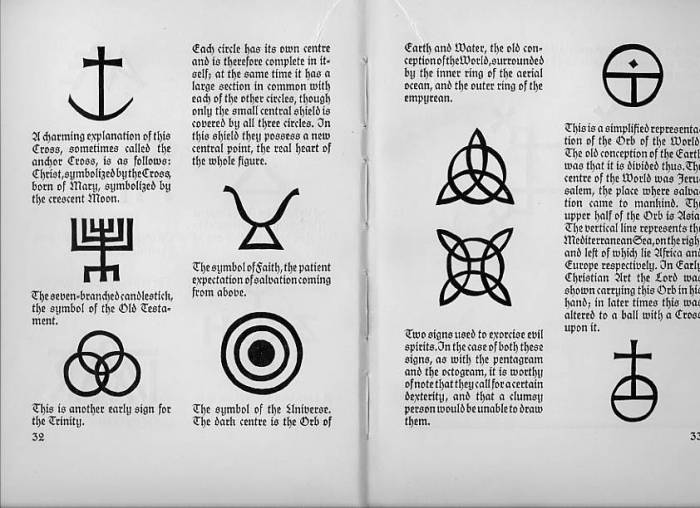 John Paul Jones‘ symbol is one used to exorcise evil spirits, with the note that a clumsy person would be unable to draw them.  This infers that such a person is confident and competent in their abilities.

The meaning behind Sandy Denny’s symbol is more of a mystery than Jimmy Page’s symbol – “an old symbol for the Godhead.  Beyond this nothing more is known …” 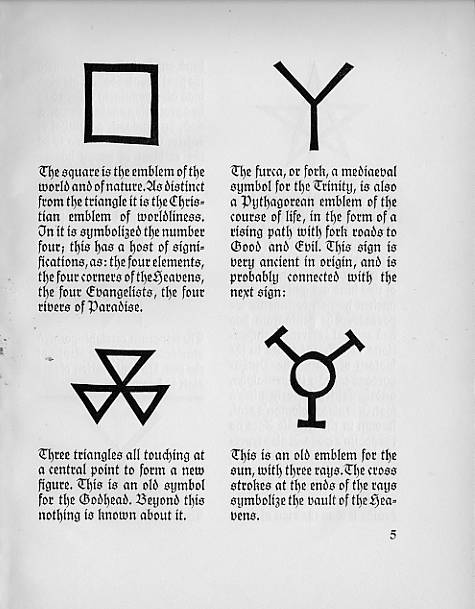 The Led Zeppelin record label was Swan Song.  A Swan Song is a dying dirge.  Fables tell that swans are able to foresee their approaching death, and they sing a beautiful, melodious song just before the fateful event.  This isn’t true, but the legend can be traced back to Chaucer in the fourteenth century, and the ancient Greeks also wrote of the ability of swans to sing.  The use of the swan song phrase in English dates back to at least 1831. 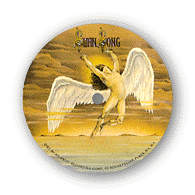 The man with wings (and no genitals) that was used as the Swan Song logo on the records came from a painting by William Rimmer from 1869/1870.  The original painting can be found in the Boston Museum of Fine Arts, and it is called Evening (The Fall of Day).  I have had many debates about who the picture is.  The consensus seems to be that it represents the God Apollo in anguish, falling at the end of the day.  Another theory is that it is Lucifer rising as in “bringer of light”, Venus, the morning star.  Unfortunately, William Rimmer didn’t leave us any clues and the figure doesn’t 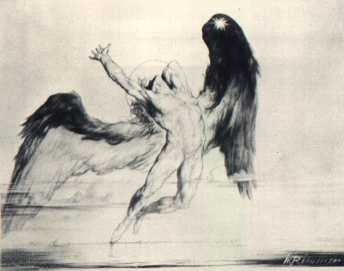 appear similar to any of the traditional ways in which Apollo or Lucifer (or Icarus or any other possible explanation) are depicted – but that is what art is all about.  So we can continue to speculate but the Apollo theory is the most prevalent.

I was recently told about some runes Jimmy Page may have carved into a stone near Keflavik airport in Iceland when Led Zeppelin where there briefly in 1970.  The photo below was taken by Pétur Friðgeirsson in 2008, and I have borrowed the image from his Flickr site.  The exact location of the stone has been kept secret, but it appears to be genuine.  A stylized runic representation of Jimmy Page’s name.  Thanks to Hrannar (Zep Iceland) for this information. 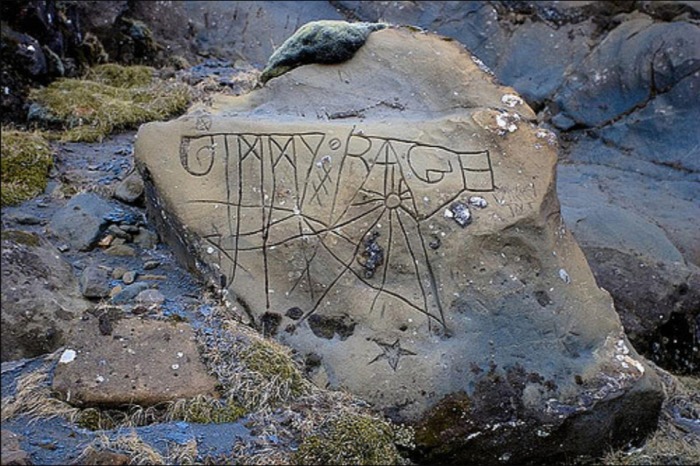